A Matter of Class by Mary Balogh

“I don’t think anything inspired me except the necessity of coming up with a story so that I could fulfill my obligation to a contract I had agreed to! I had to dream up a story, and this one popped into my head.” Mary Balogh in the interview following A Matter of Class. Nonetheless, as an experienced, and clearly honest, professional writer, she delivered a sincerely charming  historical romance novella.

Reggie and Annabelle are lifelong neighbours divided by a waterway as well as the barriers of class levels in so-called polite society. Their estates may be next to each other and they may go to the same church, but his self-made father and her top-lofty, though cash poor,  sire have been at odds for Reggie and Annabelle’s entire lives.

Told in present day and flashbacks, the reader learns that Reggie has become a dissolute spendthrift more interested in the tassels on his new Hoby boots than settling down. He’s a minor scandal compared to the fact that Annabelle has recently been recovered from an unsuccessful, but nonetheless scandalous, elopement with a family servant. Disgraced, impecunious, and in need of being advantageously foisted off on a man of means, the fathers make a plan for their children to marry. Reggie and Annabelle have plans of their own.

Light and quick, A Matter of Class moves entertainingly towards its resolution with some clever twists along the way. I recommend it as and strongly suspect I will be revisiting it when in need of a lift.

My favourite Balogh novels:
The Survivors’ Club:Only Enchanting – great book and wonderful hero
The Slightly Series: Slightly Dangerous – this one is a classic

For more Mary Balogh book reviews you can go here. 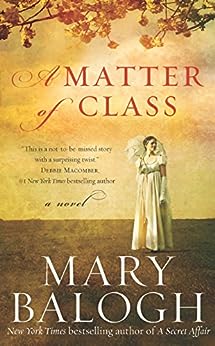