YAY! Lucy Parker is back with another wry, gratifying, and witty romance featuring a difficult man and a delightful woman.

Freddy Carlton is theatre royalty, descended from generations of performers and the granddaughter of the playwright of a seminal masterpiece called The Velvet Room. Poised to move into the highest ranks of Serious Acting, she’d rather do work that brings joy to herself and others. We met her as a late teen in Pretty Face and she is now a full adult, though only 23. With her father strong-arming her career from youthful roles towards mature glory, a showdown is coming.

J. Ford-Griffin (Griff) is a theatre historian, critic for one of the serious London papers, and family gatekeeper for a cluster of privileged eccentrics. Acerbic and observant, the reader first meets him as Freddy overhears his incisive and insightful review of her latest stage turn. She can enjoy his wit, even as she is discomfited by his seemingly innate understanding of her ambivalence towards the state of her career. Her exuberance makes him equally uncomfortable, but he gets used to it.

Conveniently, Freddy gets cast in a Jane Austen murder mystery/choose your own adventure play to be performed at the family manor Griff is trying to save from ruin. The live broadcast will provide income for the estate and the weeks of rehearsal mean Freddy and Griff will get lots of chances to find themselves thrown together.  Running alongside this marriage of convenience is a subplot involving a passionate affair between Griff and Freddy’s grandparents. Family secrets and discoveries play a large role in bringing the leads together and complicating the hell out of their relationship to threaten their public and private lives.

Particularly good at both prickly banter and showing the soft underbellies of her characters, Parker provides sparkling acrimony and intimate recognition between Freddy and Griff.  One moment I really enjoyed was Freddy telling Griff not to be so high-handed when speaking to her. Arch verbal repartee is all well and good, but  a real relationship requires sincere interaction.

The live televised theatre production and family histories provide a ready supply of potential sturm and drang  throughout The Austen Playbook. As Freddy and Griff become a couple, they move themselves into the eye of the storm and an entertaining relationship.  I sometimes find it hard to believe that a man this high in the instep could be quite so demonstrative in his affections, but that’s the wish fulfillment part of the genre.

London Celebrities Series:
Act Like It – SO GOOD!
Pretty Face – EVEN BETTER!
Making Up – Good, I’ll get to a review, I have re-read it
The Austen Playbook – see above

Links to my other reviews can be found on my complete reading list of books sorted by author and Author Commentary & The Tallies Shameful, or on my  streamlined recommendations list. 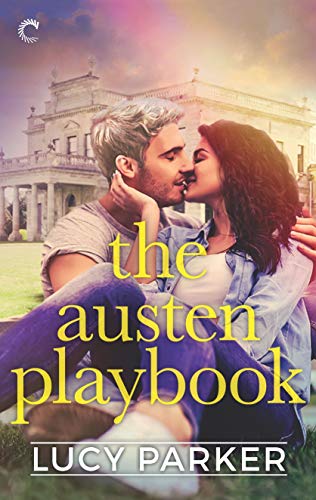