The Westcott Series: Someone to Honor by Mary Balogh

A forgotten pre-order delivery to my Kindle! Huzzah!

A Regency romance with a custody battle, Someone to Honor is the sixth book in Mary Balogh’s current Westcott series. I’ve read all of the novels, but only reviewed a couple. She’s a writer whose work I don’t bounce in anticipation of, but she is a confident writer who can be turned to for effective and sometimes fantastic romance (Only Enchanting). Her characters are generally sensible people attempting to manage their lives in practical, pragmatic ways then find themselves falling madly in love. It throws them for a loop, but they remain true to their essential selves. Balogh, like Carla Kelly, is blessedly light on sturm and drang.

From Amazon: Abigail Westcott’s dreams for her future were lost when her father died and she discovered her parents were not legally married. But now, six years later, she enjoys the independence a life without expectation provides a wealthy single woman.

Gilbert Bennington [is] the lieutenant colonel and superior officer who has escorted her wounded brother, Harry, home from the wars with Napoleon. Gil has come to help his friend and junior officer recover…If at first Gil and Abigail seem to embody what the other most despises, each will soon discover how wrong first impressions can be. For behind the appearances of the once-grand lady and the once-humble man are two people who share an understanding of what true honor means, and how only with it can one find love.

Someone Gets a Bonus should be the next book in this series because that is one hell of a great synopsis.

Gil and Abigail are not light-hearted people. Gil is downright dour and can be more than somewhat forbidding. He also has a mild inferiority complex which tends to make him clam up or be obstreperous when he’s uncomfortable – which happens very consistently when  he is alone around Abigail. He is, however, a kind and thoughtful person as the reader and Abigail see in the unguarded moments that seem to erupt from him whether he wants them to or not. Balogh’s love story builds slowly as Gil and Abigail circle each other and tentatively reach out to each other for a convincing, though maybe slightly dragged out, period of time.

All of the Westcott characters have had their lives turned upside down. Abigail, like the rest of her immediate family, had her mettle tested when she discovered her view of both herself and her world were false. What Balogh recognizes is that this kind of upheaval can ultimately be freeing, if one has the financial security and time to really ask oneself “Now what?”.  Abigail is beholden to no one, so when she is intrigued by Gil, she considers her choices and then leaps at the serious man who appeals to her, as well as the opportunity to help him. Abigail chooses the life she wants and that is the heart of the romance genre.

For more Mary Balogh reviews you can go here. Links to my other reviews can be found on my complete reading list of books sorted by author or Author Commentary & The Tallies Shameful. 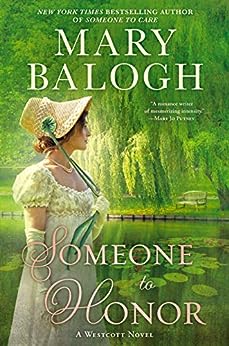