When we were little and my mother got lost while driving she’d say, “Well, children, this is a part of the country you haven’t seen before.” I feel that way about Aviva Blakeman’s recently published debut novels Stacked and Say My Name from her Devil’s Bastards MC series. The Biker/Tattooed Badboy/Legally Dubious Characters corner of the kissing book genre is not one I have visited much. They are not a group I find appealing, even secretly in a wish fulfillment genre, so the fictional criminal activities, particularly in Say My Name, left me clutching my pearls a great deal of the time while thinking:

Although these books might not be my taste in terms of the romance sub-genre, they are well-written, seamlessly plotted, and the [insert funky bass line here] is intense, and, let’s go with, earthy and explicit. All of the characters know what they want and aren’t afraid to say it. My last review was of a Mary Balogh Regency romance. She’s a writer who pens things like “he gave her his seed”, so Blakeman’s forthright and enjoyably brazen love scenes were a bit of a shift, just as her wit and clever writing were a lot fun. 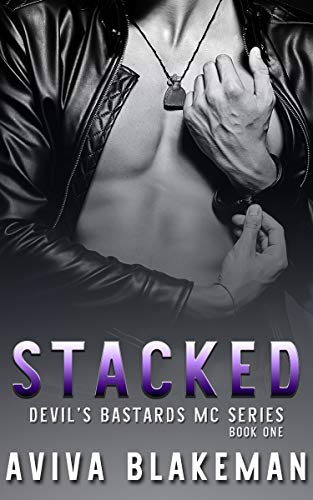 In the Devil’s Bastards first novel, a sexy librarian with 1940’s pinup style meets a hot biker in, of all locations, her workplace. Imogene has just moved to rural Oklahoma to take over as head librarian at a long-neglected branch. Her co-worker isn’t exactly welcoming, but Imogene presses on as she’s been promised funding to bring the library up-to-date and make it a going concern. She is surprised to discover it’s the president of the Devil’s Bastard’s, a man named Banks, who is bankrolling the upgrades.

After a rough day, Imogene gets smashed at the local biker bar and Mags (Oscar Magellan) brings her home and repeatedly rebuffs her increasingly insistent sexual overtures. He spends a chaste night and, fortunately for him, she is clear-eyed and still interested in the morning. (Blakeman fits in issues of consent and bodily autonomy in both of these books and, worry not, she is in favour of both.)

Mags manages the motorcycle club finances and is also a surrogate father to his niece. Aside from being the bookkeeper for a thriving criminal enterprise, he seems a decent enough guy. Blakeman creates a relaxed and natural interplay between Mags and Imogene that nicely captures the initial spark of chemistry and recognition in a new relationship.

Stacked gets the series off to a good start. The characterizations are strong and vivid, especially Imogene, and it sidesteps the scurrilous nature of the hero’s business almost completely. Say My Name dives right in. 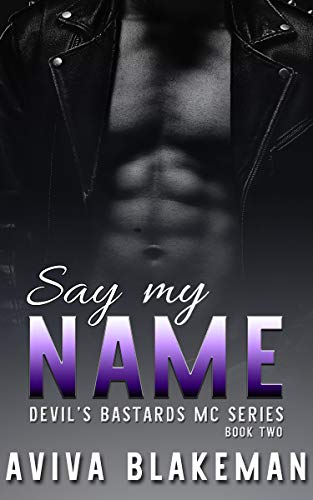 That woman was white collar. She wouldn’t understand the life he lead.

Reader, I am that woman and I have also read this book twice because it was really enjoyable despite my qualms.

Zelda Jurov is a woman from an upper middle class background who has moved to a large property in a small Oklahoma town and runs an online pottery business. Kept company by a ball-of-love Borzoi, she finds her peace disturbed when her new neighbours drunkenly stumble onto her property. Escorting a hammered young woman back to their house, and becoming progressively more covered it bodily fluids, Zelda meets John.  It’s immediately clear to her that he is one of the senior members of the biker club next door having a raging party and ruining her evening. The two are drawn to each other and there is an almost immediate and necessary “Do you understand who and what we are?” interplay between John and Zelda.

Based on the way he’d reacted when she’d asked him pointed questions, she didn’t doubt they were into illegal activity and she wondered…how illegal was illegal? What was her threshold for danger?

Reader, it’s really, really high. Zelda’s background, while financially comfortable, also has elements that have left her with an ability to cope with chaos. She’s going to need it since John represents both danger that clearly appeals to her and security at the same time. Zelda is a badass who finds herself a high-risk hero. John’s life possesses a kind of havoc she can manage, while he keeps her as safe as she feels she needs to be.

The key characteristic of the romance genre is a woman’s right to choose the life she leads and pursue her own idea of happiness.  She always gets what she wants. She always wins. The Devil’s Bastards books tested that for me. Say My Name was full of romantic chemistry, great characterization, and even sometimes laugh out loud funny, but I still need to understand who could love someone willing to hurt others for their own personal gain. The books’ answer is a woman who has no objection to this kind of mayhem and has a moral flexibility similar to that of  the man she loves. I don’t think that’s a profound conclusion, but it was one I need to come to amongst the aforementioned pearl clutching and wishing the characters all the best in their future incarceration.