Short Version: I liked Laura Florand’s A Kiss in Lavender, though it felt more serious than other books in the La Vie en Roses series. The love story was heartfelt, the happy ending earned, and it had a substantial, forthright hero and a deeply vulnerable, but assertive heroine with the heart of a lion. I’ve read it twice now and while it’s not as swoony as some Florand, it has a kind of grounded solidity that I appreciate.

Long Version Including Discussion of a Book in a Different Laura Florand Series:

Before going on a well-earned sabbatical, Laura Florand had three book series running concurrently: L’Amour et Chocolat, La Vie en Roses, and Paris Nights. As with any writer, I preferred some books over others, but A Kiss in Lavender is the first Florand in which I felt she managed to resolve character issues from a previous work. Not for the original characters themselves, but for similar ones.

From my review of The Chocolate Heart:

They are two wounded people hiding behind false fronts and suffering from painful miscommunication. Elements that had been successful in the preceding books reached an intensity that left me uncomfortable. Luc is so busy being in control that he becomes almost clinical and Summer is so vulnerable that it feels like she is being used.

In A Kiss in Lavender, Lucien Rosier is visiting his family for the first time after a 15 year self-imposed exile. He joined the French Foreign Legion after learning something that challenged his entire sense of self. Assuming a true nom de guerre, he disappeared and built a new life for himself of which he is justifiably proud.

When Lucien’s Tante Colette hired Elena Lyon to track Lucien and assorted other scattered family members down and bring them into the Rosier fold, there’s a good chance she knew or hoped sparks would fly. Without a functional family of her own, Elena has resolute strength, but a tenderness where relationships are concerned. She has learned the hard way what happens when the adults meant to protect you fail to do so and the lasting impact it can have on your life. The results of all-too-human caregivers are a frequent theme in Florand’s books, and I find that in contemporary romance especially, building a new family is a recurrent motif.

But back to Luc and Summer:  I have recently reread The Chocolate Heart and Shadowed Heart to cope with Florand’s publishing absence. The author seems to both have a soft spot for their broken, loving persistence, and for the characters themselves. She wrote them a book, a novella, and a bonus story. Luc and Summer were genuinely messed up people and neither of them had any business being in a relationship, especially since their personal demons were guaranteed to cause each other maximum stress. In contrast, Elena and Lucien clash, but learn and grow into each other to move forward as a unit which is pretty much the essence of a romance novel.

In A Kiss in Lavender, it’s like Florand has written Lucien and Elena as the psychologically healthier version of Luc and Summer. Lucien, like Luc, is very much in control of himself, but in this case, it’s a quality that nurtures his partner. He is proving his trustworthiness and reliability. When Elena is vulnerable and shuts down, she does so by drawing on inner strength rather than lashing out as Summer does.No longer painfully miscommunicating characters finding moments of bliss between rounds of angst, this alternate story has two people falling in love and persisting, then insisting on working towards shared happiness. None of the four are exactly happy-go-lucky, even in their insistent pair bonds, but at least Lucien and Elena seem like they are united in working towards a stable future.

Turning Up the Heat (Daniel/Lea) – prequel novella
A Rose in Winter (Raoul/Allegra) – prequel novella –  Florand can and has done better
The Chocolate Rose (Gabriel/Jolie) – prequel novel I *really* like, lots of sparks
Once Upon a Rose (Matt/Layla)  – fun, light escapism, I’ve reread it recently
A Wish Upon Jasmine (Damien/Jess) – not her strongest, it had promise
A Crown of Bitter Orange (Tristan/Malorie) – not memorable, he’s charming
A Kiss in Lavender (Lucien/Elena) – good, recommended

Laura Florand’s Reading List  gives an overview of her published works — of which I recommend many. I adore her particular brand of romance. Links to my other reviews can be found on my complete reading list of books sorted by author or Author Commentary & The Tallies Shameful. 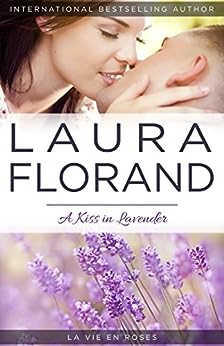