I swear that Sarina Bowen and Elle Kennedy are writing romances inspired by the hashtag notallmen, thought I’m not sure even that’s correct since the men in this series, and a lot of Bowen’s solo work, often behave in a way that is unacceptable, but is supposedly meant to be forgivable because they are nice guys. As my romance twin, Beth-Ellen, said, it’s as though they are defending men and, she added, who is the audience they are doing that for? Stay was a mostly decent romance because Kennedy and Bowen don’t seem to be capable of less, but there were a variety of elements that made me uncomfortable.

Hailey runs a virtual personal assistant business with her ex-husband in Toronto. She takes care of the VIPs personally and one of them is local hockey hottie Matt Erickson. A divorced father of twins, he is a little once bitten twice shy until he meets up with Hailey. Things move on from there, a little precipitously if you ask me given that there are children involved, and soon they are moving forward in their lives together.

Now back to the #notallmen aspect. In the previous book in the series, Good Boy, the hero climbs into bed with the heroine while she is sleeping. In this one…

Hailey has a client called MrEightInches who sends the agency requests with photos such as, “naked except for a stretchy pair of bright blue briefs, barely covering his erection, which lays angled in the briefs, straining the fabric.” Are Hailey and her colleague offended? Do they call him out for this behavior and terminate his contract? No, silly, they find it funny and enjoy his hijinks. They are entertained and gleeful each time he sends them a new request. When they find out the reason behind his, apparently, joking behavior, it all makes sense. See? He’s harmless!

Matt calls Hailey “Hottie” before they even start dating, meet, or talk. Her initials are HTE and he gives her the nickname in their correspondence. She doesn’t object despite the complete lack of respect and professionalism it shows on Matt’s part. He doesn’t mean any harm, so what’s the problem? Matt is a good guy. His presumption is excused.

In an encounter with Hailey’s ex, and before their first real date, Matt establishes their relationship by smacking her ass in front of her ex. “To my disbelief, Matt smacks my butt lightly before strolling out the door. I gape after him, unsure whether to be pissed or amused.” The correct answer is, of course, pissed.

I’m not quite sure what to do with all of my annoyance. I understand that genuine, sincere guys sometimes make mistakes,  behave inappropriately, or cross the line, but I can’t comprehend why it has become a recurring theme in Sarina Bowen’s work alone and in her joint efforts with Elle Kennedy. Can we just not do this? I get enough of poorly judged behavior being excused in real life.

My last note is that I was squicked out by the love scenes in Stay. Matt and Hailey act out a power dynamic that I found creepy: he pretends to be her coach, . “Such a good girl,” he whispers. “The coach is proud of you.” No, nix, nein, nyet, non, o-nay, nope, nay, NEWP! I am extremely uncomfortable with sex with power disparities like this and in particular ones that feign involvement of students or vulnerable people. The second the phrase “good girl” comes into play, I am OUT.

By Elle Kennedy:
Off Campus Books 1 – 4
The Deal – very good, I have re-read it
The Mistake – good
The Score – Entitled, privileged guy gets everything he wants. Granted that describes a lot of romances, but it’s annoying here. He’s a dick in The Goal, too.
The Goal – good, but not my cup of tea 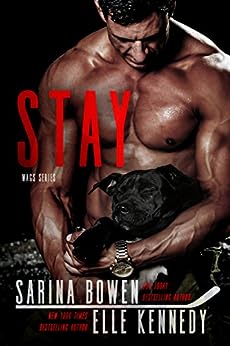