In Too Deep by Mara Jacobs, and Kathryn Shay, and Tracey Alvarez, and Lucia Jordan

There are at least fifteen kissing books called In Too Deep on Amazon and it seemed to me that my ones of readers deserved to know how they stacked up. My criteria were simple. First, the title, second, it had to be gratis. With these rigorous investigational standards, I was able to acquire four In Too Deeps in three minutes.

The Freshman Roommates Series: In Too Deep by Mara Jacobs – Young adult contemporary

Lily is a college freshman giving swimming lessons to local children when she meets Lucas. He has custody of his young brother, a criminal past, and is a recovering addict. Lily and Lucas fall in love as she is starting her life and he is trying to rebuild his. Things go sideways when he does something stupid and her privileged connections help save him. They recover and move forward with their relationship (as her parents, no doubt, have fits in the background).

This In Too Deep wins for most appropriate use of the phrase as Lily is almost unfathomably out of her depth in Lucas’s world. He’s a nice enough young man, but simultaneously extremely mature for his age and too young for what he has been asked to handle.  One of my reading notes simply said, “18.” I could say that I have learned Lily’s age is my line in the sand for the new adult genre because, as a Woman of a Certain Age,  18 is a child to me, but I have read really good romances with heroines that young (never the hero, I note),  so it all comes down to believable and interesting characters. This In Too Deep is not that book.

For the benefit of the doubt and what I assume is the target audience, I suppose that the plot was meant to appeal to the good girl/bad boy combination in which the hero’s ill-advised behavior is actually mostly in the past and adds a veneer of danger, but Lily is incredibly sheltered and a recovering addict charged with the care of his younger brother is a lot to believe she could cope with. Old enough to be her mother, I was horrified at the suggestion she would become involved with this young man, no matter how conscientious he was. Lily has neither the sand nor maturity to deal with the situation and Lucas’s sh*t is insufficiently together for him to be a good choice for her. 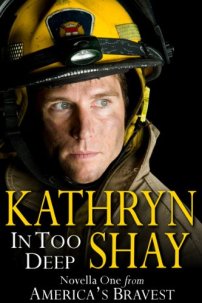 Amazon: Kathryn Shay spent five years riding fire trucks with a large city fire department, eating in their firehouses and interviewing hundreds of America’s Bravest. Read the novellas that resulted from her intense relationship with firefighters!

The research may have been excellent, but this In Too Deep was a non-event. The Captain and one of his firefighters have the hots for each other, they fight the attraction to maintain professionalism, and then they get it on while trapped in a rubble filled basement.  I repeat: After a cave in and while stuck in debris and running out of oxygen, they make sweet, sweet love. Sure. Afterward, they pretend nothing happened, try to go on with their lives, but cannot fight what they had been repressing. It’s a non-problem and easily solved. More of a gesture than a novella, there was so little going on and so little at stake, even when they were going to die, that I didn’t understand the point of the book.

For a subplot, this In Too Deep has a local reporter trying to influence budget cuts by reporting on the firefighters on- and off-duty activities like some overzealous Hall Monitor. The firefighters respond by starting their own blog to highlight how hard they work, instead of, you know, ignoring her completely. Would the town they work for not have more oversight and influence than an ambitious reporter?

Since it’s not clear from what I wrote and that cover with only one person on it, this is a M/F romance, so I don’t even get to make any “firefighters and their hoses” jokes, or only half as many as I might have hoped to.

In Too Deep by Lucia Gordon 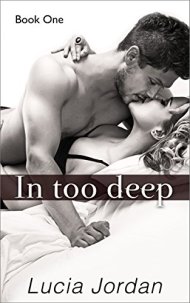 Not a standalone novel, but a teaser volume, this In Too Deep was ridiculous. Rayne — her name is RAYNE, not “Rain” because that’s not quirky enough –, is tasked by her loathsome new corporate boss to attend a costume party for which he provides an obscene French maid costume, including undergarments, which she actually agrees to wear because that is the way large, successful companies treat their employees. Never mind ridiculous plotting, the former administrative professional in me rolled her eyes so hard, I sprained my optic nerve. If the rest of this review is erratic, blame the eye patch.

Bored at the party she has been obliged to attend dressed like a “whore”, Rayne meets a mysterious man, she calls him Crasher (my eye!) and the romance commences. Of course, by “romance”, I mean they get busy and, as is so often the case in contemporary, post 50 Shades of Grey books, he’s immediately very dominant and she loves every minute of it. So I have to ask for the umpteenth time: Doesn’t this kind of relationship require some kind of negotiation before one of you starts giving orders, slapping the other’s tushie, pulling hair, and biting? Moreover, why do all these billionaire corporate types (SPOILER) want power in the bedroom? Is being a rich, white, privileged guy at the top of the entitled heap not enough for these men? Why is it never the “this world was made for me” guy who wants to be slapped around and humiliated? Can you imagine what an enormous asshat he must be to crave more dominance? What absolute twaddle.

If you are still with me at this point in my TL:DR review and you feel compelled to read an In Too Deep, this next one is what I would recommend.

Due South Series Book 1: In Too Deep: A New Zealand Enemies to Lovers Second Chances Romance by Tracey Alvarez

What a lovely cover!

In Too Deep had an exotic setting, unusual leads, and a reunion plot. Piper Harland has taken a break from her kick ass job as a police rescue diver and returned to her remote, island hometown in New Zealand to help out with her brother’s boat charter and diving business. She strikes a bargain to work at her ex-boyfriend’s family restaurant in exchange for his help with the charters. Ryan “West” Westlake is the man she left behind when she went to the mainland to become a police officer.

In addition to the love story, this In Too Deep is about life in a small New Zealand town which was, for me, a unusual location and while people are people everywhere you go, the setting counted to me as romantic. West and Piper both live for their time on and in the water, he is a competitive free diver, but while she loves it, her own personal trauma is making it hard for her to continue. Unbeknownst to her family and West, her work triggers memories of a personal loss that both inspired her choice of profession and complicates it.  The story struck a good balance between the heightened reality of a love story and the down-to-earth elements of their island life.  West and Piper (two great names) have to get over their past relationship mistakes and their own issues to find a way to move forward together. I liked the novel, but not enough to continue the series.