The Survivors’ Club: Only Beloved by Mary Balogh

The last book in Mary Balogh’s excellent seven book historical romance Survivors’ Club series features the kindest man in the world and a happy spinster. About a decade ago, George, Duke of Stanhope, turned his estate into a hospital and took wounded Napoleonic War veterans into his home. Six of the patients, a woman and five men, stayed behind when the others left and over three years of healing formed an intense bond. Each of them has now had a love story and embarked on a new life, so it is their host’s turn to find companionship and a fulfilling homelife. George lost his young son in the War and his wife, unable to bear her grief, took her own life. Opening his ancestral home allowed him to help others, heal himself, and deflect the world’s attempts to see beyond the comfort he gives others and into his own pain.

The Survivors’ Club holds annual reunions and during one of these George was introduced to and delighted by Miss Dora Debbins. She was flattered by the attention and enjoyed his company as well. The sister of the heroine of Only Enchanting, Dora is forty, to George’s forty-eight, and lives and works quite pleasantly as a musician and teacher in a country town. When George reappears out of the blue to ask for her hand in marriage, Dora is stunned, but her instincts tell her to say yes. She sees in his gesture her chance to seek out a new kind of life as a a wife and – who knows – maybe a mother as well. They may be older than usual characters, but George and Dora are both young enough and old enough to make the relationship work despite the difference in their stations.

George and Dora are strongly attracted to and hold great affection for each other, but agree that they are marrying for companionship rather than a grand passion. Life and romance novels being what they are, the gods laugh at their plans and they fall quietly and deeply in love. Romance novels and life being what they are, and Mary Balogh’s common theme of broken people fitting their pieces together, George and Dora find much more in their relationship than they had ever expected. It is not a Dramatic Relationship, Balogh characters are always too sensible and wonderfully grown up for such things, but the writing successfully conveys the profound bond and joy the two share. As with all strong romances, the team they are together is stronger than the separate individuals they are apart.

It’s hard to go wrong with a Mary Balogh novel. She’s such a reliable writer. Only Beloved is not the best entry in the Survivors’ Club series, Only Enchanting and Only a Promise share that honour, but as a wrap up to this very strong series it works well. As with her other larger series, Balogh needs to repeat a lot of identifying information and quickly encapsulate the previous stories when characters reappear. It both helps sort out my confusion and drags the story down a bit. As a reader, I enjoy visiting old friends, but I don’t want them to take over the current reading experience.

The Survivors’ Club:
The Proposal  (Hugo/Gwen) – pleasant
The Arrangement  (Vincent/Sophia) – very sweet, understated
The Escape (Benedict/Samantha) – meh
Only Enchanting (Flavian/Agnes) – Wonderful, read this one. Read it twice.
Only a Promise  (Ralph/Chloe) – very good
Only a Kiss (Percy/Imogen) – nothing special
Only Beloved – please see above

Balogh has another popular series, all titled with “Slightly”, and Slightly Dangerous is a classic of the genre.

Links to my other reviews can be found on my complete reading list of books sorted by author orAuthor Commentary & The Tallies Shameful. 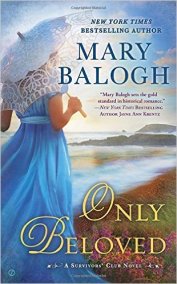