The Immortals After Dark Series: The Warlord Wants Forever by Kresley Cole

If you whisper the title, it sounds even better. 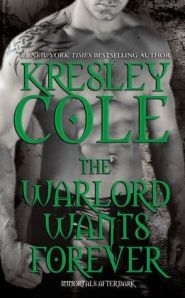 Just when I thought my preferred reading material couldn’t possibly be more silly, my brain pointed out, “You’ve never really given paranormal romance a shot”. Kresley Cole is a very big name in the genre. She has a huge following. She has dozens of books. She has copious high ratings on Amazon. I have a Kindle. I have 99 cents. The Warlord Wants Forever was worth each and every one of them because Nikolai Wroth is a vampire and Myst the Coveted is, I am not making this up, a Valkyrie. They meet cute.

A prequel to Cole’s Immortals After Dark series, The Warlord Wants Forever is set in an unseen world populated by illusory creatures familiar from mythology and Things That Go Bump in the Night. There may also be shape-shifters. I’m not sure. Until last night, my main romance concern was historically-accurate frocks and then suddenly it was all fangs, blood, and violently intense love scenes that I’ve decided to christen “THUNDER SEX™”. There is some sort of internecine war between the Myth/Bump factions and Nikolai the hot vampire warlord gets “blooded” (imprinted) by the tempestuous Valkyrie, Myst the Coveted. It’s a mating system requiring, to put it delicately, initial release exclusivity, so when Myst escapes Nikolai before the THUNDER SEX™ consummation devoutly to be wished, he must chase his Valkyrie down to relieve his eternal blue balls. It takes him five years. Then he has to convince her to shack up with him, a lesser immortal being. There is a magical waist chain involved.

The novella was fun and the first time I’ve heard of a story that did involve a Valkyrie and didn’t involve Richard Wagner. The THUNDER SEX™ was hot and plentiful, if a trifle “red in tooth and claw” for my tastes. There is clearly a huge audience for paranormal romance and I could go on about what tastes or appetites this kind of fiction appeals to, but I think it all comes down, almost literally because of the vampires, to à chacun son goût.  If I ever have qualms about the nature of The (Shameful) Tally’s contents, I now know it could be worse, if not quite so deliciously ridiculous.

After reading The Warlord Wants Forever,  I tried another work from Cole’s Immortals After Dark series, Lothaire, about an ancient vampire finding love with a blue-collar mortal (which is apparently totally declassé and galling). It was even redder in tooth and claw than The Warlord Wants Forever  and included a THUNDER SEX™ scene which can be imagined as biting a sausage longways for a protracted period of time. Sex? Sure. Blood. Useful. Sex and blood? I’m out thus ended my paranormal romance experiment.

… or I was until being given more Kresley Cole books by Malin and Alexis. I’M NOT MADE OF STONE! As a result, I have reviewed the following linked books from the series as well A Hunger Like No Other; No Rest for the Wicked; Wicked Deeds on a Winter’s Night; Dark Needs at Night’s Edge; Dark Desires After Dusk; Kiss of a Demon King; Deep Kiss of Winter; Pleasure of a Dark Prince; Demon from the Dark; Dreams of a Dark Warrior; Lothaire; MacRieve; Shadow’s Claim.

One thought on “The Immortals After Dark Series: The Warlord Wants Forever by Kresley Cole”