A New Adult romance about a professional football player and a woman in her last year of university on a track scholarship, Play was an odd read. As happens sometimes with this genre, it felt like the version of romance conjured up by an awkward teen who has never been kissed other than that one time at a 13th birthday party, “but that was on a dare, so it doesn’t count.” 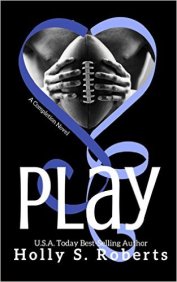 I have some notes, but the first one is the showstopper:

Opening with an attempted sexual assault when a professional football player forces the heroine to her knees, “The scunt owes me a sblowjob”, she is rescued by the hero who offers to go to the police with her. The assailant’s friends dismiss the behaviour as a product of drunkenness. At the end of the book, the assailant, having apologised for his violent attack, is one of the groomsmen at the hero and heroine’s wedding.

Other items of note in Killian and Rebecca’s book are below. Direct quotes are in italics:

Scant minutes after a sexual assault and still shaken, Rebecca is overwhelmingly aroused in Killian’s presence and very concerned about how she looks.

There’s a lot of slutshaming both by Rebecca of her sister and by Rebecca of Rebecca. Something needs to be done about the “but those other women who are having sex and aren’t the main character are whores” situation in these books.

Killian and Rebecca find each other physically attractive.  No other reasons, rationalizations, explanations, or elucidations for their emotional connection are provided.

Every time they go somewhere, Killian fastens Rebecca’s seat belt for her.

Killian hadn’t mentioned anything about the hair on my lady bits, but I wanted to do this for him anyway. She gets her privates waxed as a gift for him to make herself more attractive. Is that really a thing?

“I’m changing one rule and letting you have a hair tie while you run.” He said to the ELITE ATHLETE! Sidebar: Who says “hair tie”?

In addition to requiring she wear her hair down at all times, Killian has other rules; for example, Rebecca is also supposed to walk around naked whenever they are at home because he finds her so amazingly beautiful.

“Killian, please, I don’t feel comfortable.” Mortification caused tears in my eyes. Many times, the hero makes Rebecca feel this way and she is just supposed to accept that he knows best because he loves her so much and she comes around to agreeing with him.

Killian gets injured and pushes Rebecca away by vilely requesting a sex act.  When he comes to his senses, he stalks her – with the help of his severely disabled brother – until she gives in.

The temporary break up is so painful for Rebecca that it improves her running, so she gets the boy and wins races.

Rebecca wants to get married and have babies which is, of course, totally up to her, but she’s only 21.

The next time I read a romance in which a heroine complains about being thin, my ass is going to explode.

If you want to read a good New Adult romance featuring athletes, I suggest one of the following: