Finally, a Christina Lauren couple that doesn’t scream the house down in the throes of passion. Quiet people need love, too. 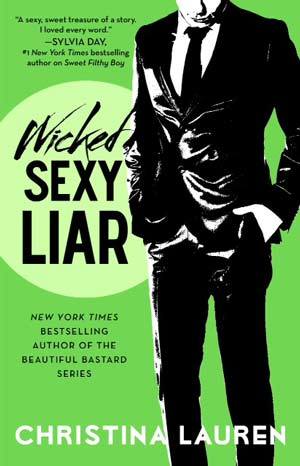 In the first three books of the new adult romance Wild Seasons series, each of a trio of close friends made impulsive marriages on a graduation trip to Las Vegas. The aftermath of each of these choices was the basis for Mia, Harlow, and Lola’s novels. Book four brings Lola’s surfer roommate, London, to the fore and pairs her with Mia’s ex-boyfriend, Luke. I have enjoyed the Wild Seasons series and I think Wicked Sexy Liar may be my favourite. It struck the right balance of romance, sex – which is important given that Christina Lauren writes novels billed erotic – and character development.

Luke Sutter is a protector-type in rake’s clothing. He has been playing the field, sowing his oats, and tapping everything in sight for the past few years. A legal intern about to undertake law school, he’s 23 years old and out for fun. In Mia’s book, Sweet Filthy Boy, he was portrayed as a total player who had broken her heart. Of course, his heart was broken, too, and while he has created the impression that he handled it well by seeing a succession of women, he hasn’t been in a relationship since the “Great Breakup of 2010”. As the one with Mia lasted about 7 years, the reader quickly realises he has good boyfriend potential once he decides to grow up.

London has completed university with a degree in graphic design. Rather than toil for peanuts and build a clientele, she is taking some time to figure out what she wants to do as she surfs by day and tends bar by night. When Luke approaches her and they have a one night stand, he is smitten, but she is wary of the delicious man in front of her.

I have railed against the plot I call “The Pig Becomes a Person“, but that is not the case here. Instead of being some louche douchecanoe waiting for a magical transformative female to attach himself to, Luke has proven that he is capable of a steady and healthy relationship, he just needs to climb out of the hole he has dug himself into. Often, those heroes who have been chasing any and all willing females, but have never met The One and don’t change until they do. Luke had and lost his One and Lauren does a really good job of his slow recognition that he has turned into a skeevy guy who needs to do some rearranging with his life. Convincing London of this takes a while. She sees him as a potential boff buddy, but nothing more and, after a distasteful public encounter, not even that. She also struggles with her obligation to her circle of friends. It felt realistic within the heightened reality of a new adult romance. Liking both of them, and the sister who gives Luke endless sh*t about his life, Wicked Sexy Liar made for a relaxing, romantic read.

A Not-Joe Not-So-Short Short after the jump