Tag Archives: A Princess in Hiding

A Princess in Hiding Series: The Duke of Olympia Meets His Match

Despite the wonderful writing and Juliana Gray’s consistent ability to create interesting characters and throw in some excitement, I couldn’t fully enjoy the Victorian romance novella The Duke of Olympia Meets His Match, but I didn’t mind. I paid a reasonable sum for the book, and since I borrowed all of her other novels from the library, I am happy to have contributed to Gray’s coffers. May she enjoy my shekels in good health and continue to devise the complex, dovetailed series plots and wonderful characterizations at which she excels.

From Amazon: Aboard the luxuriously appointed SS Majestic, the duke is on a mission to retrieve a most important portfolio of papers and thwart a known anarchist. As the ship steams across the Atlantic, the duke’s search for the notorious master of disguise forces him into close quarters with an American heiress and her widowed governess, Mrs. Penelope Schuyler. While Olympia has known his fair share of intriguing women, Mrs. Schuyler seems to have a way of challenging his expectations at every turn. But as their clandestine meetings lead them down an unexpected path, the duke must determine if Penelope is a woman to be trusted.

The Duke of Olympia appears in both of Gray’s published trilogies and I have described him previously as “a conniving old son of a bitch thoroughly experienced in shenanigans”. A compelling character, there is just one problem with giving him his own book and a love interest. He may be 6′ 5″ tall, hale and hearty, broad of chest and deep of voice, but he is seventy-four years old. It’s a perfectly reasonable age to fall in love in the real world, but for a romance novel he falls beyond the line for me. I could have lived with sixty. The heroine, Penelope, a delightful character, is just about fifty. Age differences, of course, grow less important in relationships the older we get, but Olympia is SEVENTY-FOUR years old and Penelope is young enough to be his daughter. I am a Woman of a Certain Age and The Duke of Olympia Meets His Match has the character equivalent of me becoming romantically involved with my father-in-law. I couldn’t get past it. If Penelope had been a decade older, or the Duke younger, I would have been delighted to read their story, but the combination of the vast age difference and his septuagenarian status became an insurmountable combination.

For a historical romance with large age difference that works, I recommend Julie Anne Long’s genre classic What I Did for a Duke. He’s pushing forty, she’s twenty and Long absolutely pulls it off. 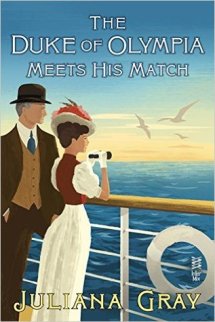 A Princess in Hiding Series: How to School Your Scoundrel by Juliana Gray

The last novel in Juliana Gray’s “A Princess in Hiding” Victorian romance series, How to School Your Scoundrel features a challenging hero and a remarkably self-possessed and capable heroine. Luisa is the eldest and last hidden princess. Like her sisters Emilie and Stefanie, she fled her country after her father, the Crown Prince, was murdered in a coup. Luisa’s husband was killed as well. Secreted away by a first-rate manipulator and conniving bastard, their uncle, the sisters were trained to masquerade as men and then sent to work in disguise for conveniently marriageable protectors. Particularly deft with plotting, Juliana Gray has cleverly intersected and overlapped Emile, Stefanie, and Luisa’s stories. With her sisters safe, it is time to learn how Luisa will be returned to power in her homeland and just happen to find a suitable Consort along the way. Her position as the secretary for the Earl of Somerton is a good start. The villain of book two in Gray’s  “Affairs by Moonlight” series, A Gentleman Never Tells, Somerton is an almost entirely irredeemable character. To become a decent human being, Somerton’s heart will need to grow three sizes and the leaden lump of his soul be alchemized into gold. Gray manages two sizes and some silver.

The challenge of Somerton’s redemption is that so much of his behaviour is that of a classic bully. Profoundly resentful of his wife Elizabeth’s lack of affection for him and the serene mien she is able to nonetheless affect, he is torn between seeking to control her and not knowing how to let go. Elizabeth’s side of the marriage was shown in A Gentleman Never Tells. It was compelling and heartbreaking. The reader may be seeing the other side of the coin in How to School Your Scoundrel, but Somerton is still a jealous, manipulative, overbearing son of a bitch. The suggestion that he would change in a new relationship was not enough for me. There is a moment late in the book when Luisa and Elizabeth are alone and Luisa tells her that she never gave Somerton a fair shake: “Yes, he can be brutal. But he also has the capacity for great devotion. And you never knew. You never gave him a chance, did you? You never opened your heart to him.” I see, so the stalking and paranoia are his wife’s fault, are they? If it was just that Somerton was heartbroken at his wife’s lack of feeling for him, it would be sympathetic; however, he is jealous and obsessed with her imagined infidelity. He has her followed, investigated, and isolated. He rejects their child. Elizabeth did her best to live honourably in an untenable situation while her husband hounded her by day and whored by night. Part of the point of marrying into ruling a country is that he will be strong and betimes ruthless which he certainly is, but the novel did not have time to transform him into a reasonable human being as well.

Another issue I had with the story was whether or not I wanted to read a book about a dictator, whatever the suggestion of benevolence in counterpoint to the dastardly revolutionaries, being returned to power, especially when the novels are set in 1889 and said autocrats are leaders of a German principality. I err on the side of democracy and just because the country was being turned into a different kind of dictatorship did not suggest to me that what the citizens needed was a return to the status quo.

How to School Your Scoundrel was well-written and Gray almost pulled off a huge character transformation. I’m sure Somerton’s brute with a heart of gold will appeal to some readers, but I am not one of them. Still, you should give Gray a try. She has six books out and this is the only one I wouldn’t recommend. I particularly liked Stefanie’s book, How to Master Your Marquis from this series and  A Duke Never Yields from the “Affairs by Moonlight” trilogy which has a lighter tone over all.